In 2014 we were able to film at the Lake Sonoma 50 Mile event. You can watch the video below! Below the video you’ll find a write-up from our producer on the ground during the race.

Cameron White here from Journeyfilm!  Journeyfilm, provided me an opportunity to go out and film the Sonoma Lake 50 ultra marathon race. The video that we produced after the race can be seen on iRunFar, who had contracted with us to cover the race. I left Friday afternoon and made it to Healdsburg, CA just in time to experience an evening of glorious scenery and light. In beautiful Napa-Sonoma wine country the air was just humid enough to cast an otherworldly aura over everything. After checking into my hotel I immediately ran out to get some b-roll shots of the area. 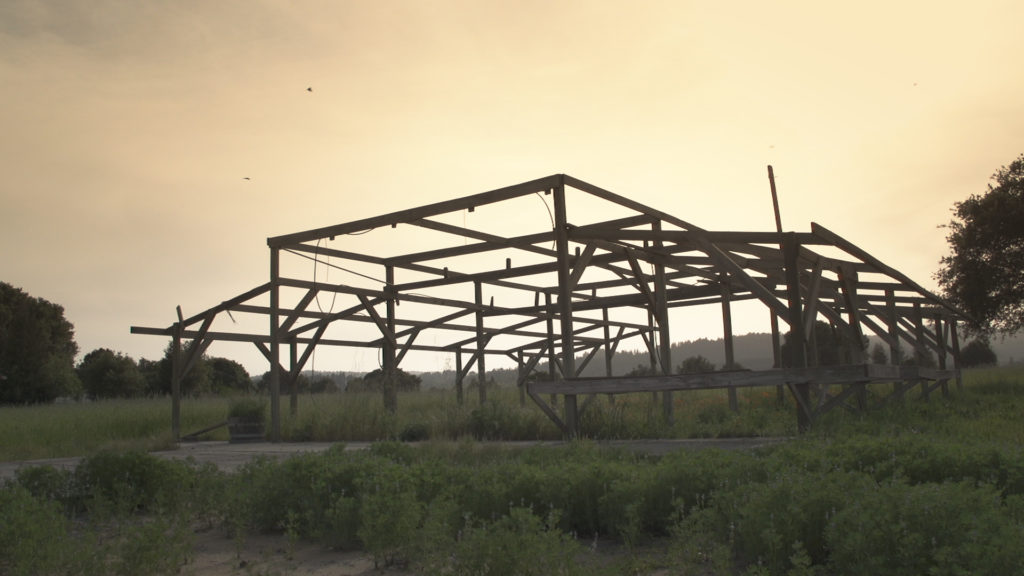 Not even a mile down the road from my hotel there was this frame of an old barn adjacent to a beautiful grassy field. Everywhere I looked there were acres upon acres of vineyards. None of this footage really made it into the final video–I failed to ask the front runners (after they’d run 50 miles, no less) to pontificate on California wine country, but the images were too wonderful not to share. 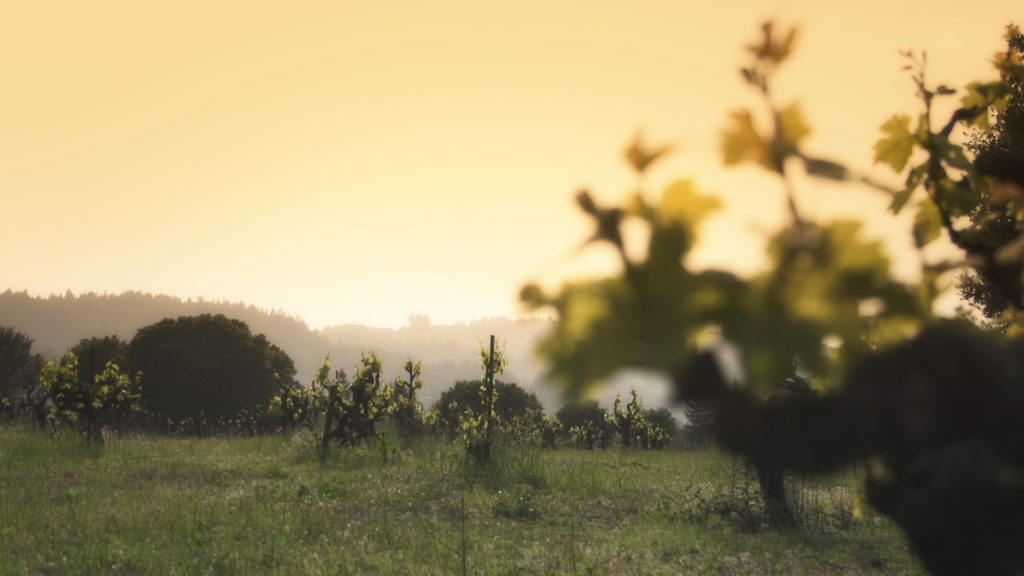 I then met with Meghan Hicks of iRunFar to go over the plan for the next day. Filming races can be a challenge: iRunFar desired to have coverage of both the men and women frontrunners and to get as much varied terrain as possible to showcase the beautiful course. 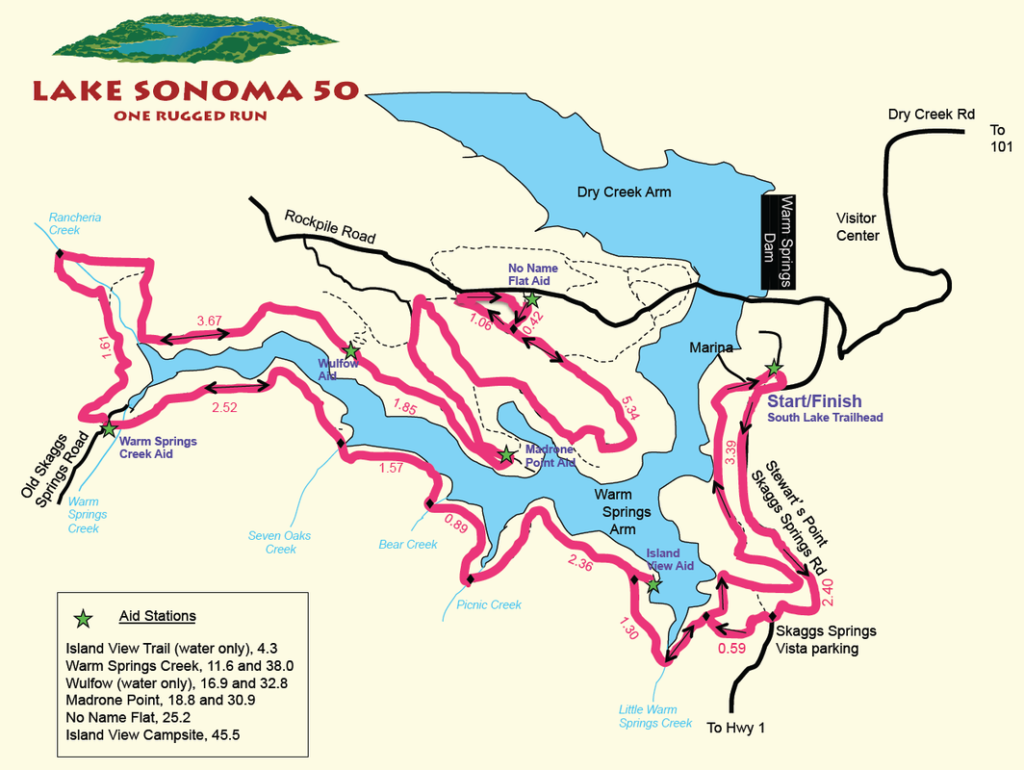 The race was to be an out-and-back style, and many of the aid stations were either inaccessible by car or required some amount of hiking in to reach them. Wanting to at least be able to make it to the start/finish line with no problem, as soon as our meeting was over I sped up the road from Healdsburg to the Lake Sonoma lookout area. The sun was just setting and I made sure to break out Studio Benna’s trusty Sony FS700 and our slider to get a few shots of the lake. 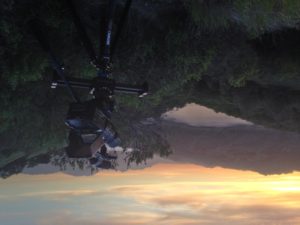 The company Edlekrone makes a great little slider that has a unique design allowing for a slider with the physical length of 30 inches to move quite a bit further than that. It was really easy to bring out and get some fantastic shots of the location.

After the sun set the sky turned purple. I couldn’t believe my eyes as the light dimmed. I’ll admit that I’ve done a little photo-editing on all the pictures posted so far in order to boost colors and contrast but this photo is straight out of camera–this is what it actually looked like: 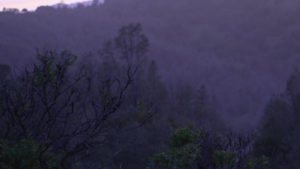 I headed back in the dark, planning how to best capture the event and hoping I could get to sleep quickly despite the excitement I felt.

With a start time of 6:30 I didn’t have to get up too early but I did want to make sure to get there ahead of most of the runners and crews so I could get some timelapses of people and cars arriving. Before I knew it the starting whistle was blown and the huge pack of runners was off. From that point on, it was a battle to get ahead of the pack, find the best places to park and try to get as many shots of the frontrunners as possible.

Fog was the name of the game for most of the morning. Before the sun rose, it even rained a little bit, but for a good chunk of the morning as I drove to get ahead of the runners this is what the world looked like to me: 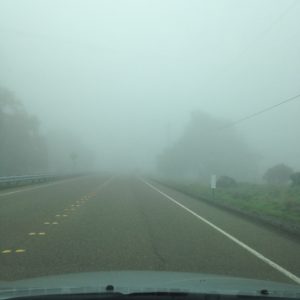 It was quite a surreal experience, really. At the start of the race, even though it was dark and wet, I was surrounded by people and lights. When I drove the first two miles to follow the pack of runners on the road I was with a whole group of folks looking to see the runners make the turn to the dirt path. But as soon as that passed, I was all by myself.

The rest of my day is fairly well outlined in the video that we produced on the Monday after I got back from the race. I sped from the first aid station (Warm Springs) all the way around the lake to meet up with Meghan at the turn around point. I was blown away that, despite being in a car driving at speeds of over 50 mph, I could barely keep ahead of the runners. Sure, they were on a footpath, but it never fails to impress me how hard it is to keep up with these amazing athletes.

The sun finally broke around 11:00am, and it immediately started to heat up. While it had been something approaching chilly most of the morning, after the fog lifted it got hot. Spending most of my time in Northern Nevada (where Reno film production usually keeps me), I forget what humidity is most of the time. But, despite the hot conditions, it was a beautiful day.

After some more driving and chasing runners I made it back to the finish line just in time to see this years men’s race winner, Zach Miller, come through the finish line.

I spent the rest of the afternoon getting interviews with the winners and capturing more footage of other runners coming through the finish. After that I had to head back home to Reno. It had been a long day but it was an amazing race. When I got back to Reno that night I headed to Journeyfilm’s edit bay and immediately offloaded the footage and backed it up on our RAID5 system and simultaneously uploaded it to our cloud-based backup system. Data management and archival is vital to how we run things at Journeyfilm and despite my desire for my own bed, data always comes first!

Though it pains me to make the pun, the world of racing moves quickly. iRunFar wanted to have a video of the race available to their followers as soon as possible. Monday morning JB Benna and I reviewed the footage from the race and started assembling a video that would not only tell the story of the race, but also showcase the front runners and their respective journeys.

As part of the runup to the launch of Journeyfilm’s weekly live trail running webcast, TraiLive, this segment was produced as a preview segment of that show. JB filmed an introduction and by Monday evening we’d finished the edit, complete with music, color correction and, we hoped, an emotionally fulfilling experience for viewers.

Currently the video can be seen on iRunFar’s site here.

Journeyfilm and Studio Benna were happy to produce this piece of work and look forward to the upcoming race season. Stay tuned for more stories from Journeyfilm  and keep for updates of our adventures in filmmaking.